Unusual suspects, the cult party of Sankeys Ibiza, has announced  five events for the winter season 2016/2017!

Here you have the official poster with all the confirmed dates.

Ibiza by night – as usual- will update you soon also with the line ups.

Ready for a pyrotechnic winter in Ibiza?

Ibiza wrote it a few weeks ago: autumn and winter 2015/2016 in Ibiza would have in store many surprises.

Save the date, next Sunday 6th of December, starting at 13,00, will be a day (and night) of good music, and the entry will be free.

It will be possible also to eat at Lips,  for further infos, here you have the link to the event page on Facebook:

This is the official poster. Ready for a great free beach party?

Sushipoint is one of the cult locations during autumn and winter in Ibiza.

During the weekend at Sushipoint will play some of the best dj residents in Ibiza, and next Friday 23rd of October will be hosted “Deep fusion”.

The line up is composed by Miguel Garji (Ibiza Global radio) and Stefano Geminis, two artists that will guarantee elegant sets.

As usual, the entry will be free. 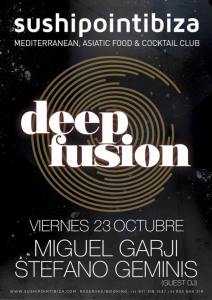 One year ago “Ibiza talents” was born through its creator  Davide Avallone and is probably one of the most intriguing shows of winter time in Ibiza.

Davide Avallone, a young and successful organizer on the island (his last achievement  was the party “Music on”  at Amnesia, the amazing show of Marco Carola, -that he promoted together with the other two top promoters of  Ibiza, Roberto Postiglione and Ernesto Senatore and with the Carola’s manager Luca Piccolo)   presents for the night of the 30th of November at Pacha an excellent line-up.

In the booth will play  Marc Antona (Music on/Dissonant), Marco Yanes, a young Dj that’s much more than a promise, Tom Pool and Angel Linde, so there is your guarantee of good music!

Ibiza by night met Davide Avallone in Ibiza, where he explained  the concept of “Ibiza talents” … 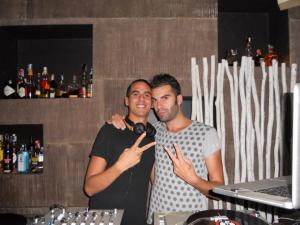 The idea of Davide about his production is very clear: “Ibiza Talent is a new concept of party, but is much more than just a party.. I am creating a new group of dj’s, and I am creating it by putting together a group with the dj’s that choose to live in Ibiza in winter time or a bigger  part of the year.. The word “talents” has a global meaning, and includes lot of artist with a specific talent…in the show are involved photographers, choreographers, dancers, perfromers… Ibiza talents gives them also the opportunity to be known and to perform in a club famous worldwide as the Pacha Ibiza is…“.

And the history of “Ibiza talents” is already rich in scores……last year  many artists played, as   “Neverdogs”..  a surprise act for 2012, or as Gaty Lopez, that now has some tracks in the charts…. so  soon we could know which will be the next star….

For the season 2012- 2013 there are many new ideas and surprises for Ibiza talents ….and Davide Avallone says :”My dream is to  grow Ibiza talents step by step… I wish to create a strong group and many fans around…I hope also to organize soon some events of Ibiza talents also outside the island…. as Ibiza is an island that create a global music newtork worldwide“.

So, now let’s wait for the 30th of November at Pacha and  be ready for  a night of good music!

p.s. I wish to say a special thanks to my dear friend Natasha Ibiza for the editing! Thanks Natasha!!!