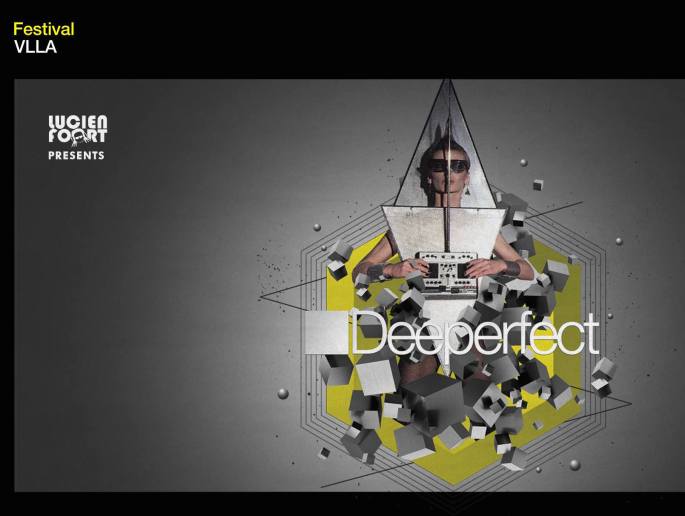 The entrance will be free.

Here you have  the official poster & the complete line up.

Space closing party 2016 will be memorable.

But Space Ibiza also announced next releases of online tickets (see poster below).

Our suggestion if: buy your ticket now, because of the last Space closing party will be simply epic! 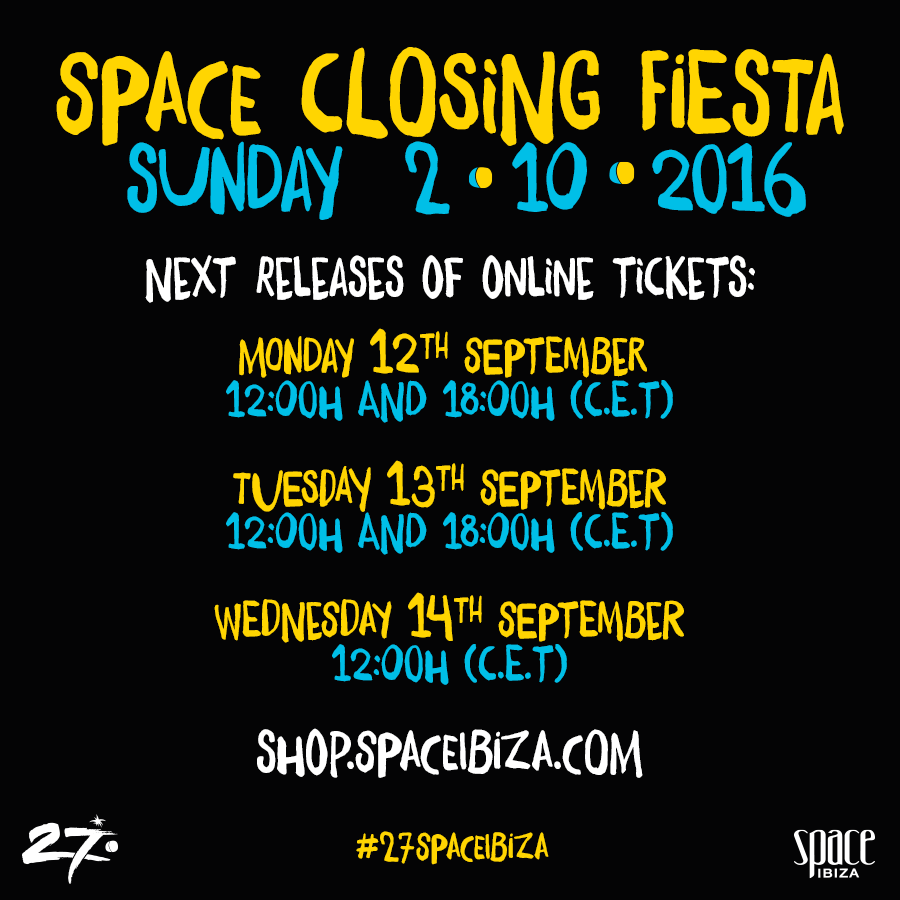 Next August 9th with “The King” will play a top line up: Pan -Pot & Carlo Lio in The “Discoteca”.

Then, in the terrace, will perform a living legend as Fatboy Slim, plus Stefano Noferini  & Just be.

In the last week “The Last Chapter” of Carl Cox was still sold out,  our suggestion is to  book your ticket and arrive early!

This is the official poster. Ibiza 2016 makes the difference.

Let’s start a new week with Ibiza Live radio  ( http://www.ibizaliveradio.com ) the web radio based on the island, founded and directed by Miss Luna.

This week there are several news, firstly a speciale edition next Saturday of Ibiza by night radio show with Alex Del Vecchio, that returns with us, plus several intriguing programs.

Ready for another great week? And don’t forget, next week the guest of Ibiza by night radio show will be Lorenzo Fassi of “Club Haus 80’s” and soon Viktor Martini will be back too!

The team of Ibiza by night will partecipate at Ade 2015!

And This is one of the most interesting events of Ade: Dockyard. Next 17th of October will play artists that we systematically hear and love in Ibiza,  as Paco Osuna, Monika Kruse, Carlo Lio, Stefano Noferini, Sam Paganini, Sasha Carassi, Sam Paganini.

So save the date and be ready for a great festival!

Tonight, 18th of August, at Space Ibiza will be celebrated another great episode of Carl Cox revolution!

Carl Cox is scoring great results also in Ibiza 2015, and his party is the most influent of Tuesday night.

And with “King” Carl Cox  tonight will play an amazing  line up composed by the Italian dj and producer Davide Squillace, plus Deetron, Stefano Noferini, Umek and Mark Knight, great names for an unmissable party.

Here you have the official poster…see you there!

Sunday, 12th of July, starting  at 16,00 till midnight, at No name Ibiza lands another intriguing free party: Deeperfect Ibiza!

The line up is completed by Sleepy & Boo, Natch! & Dothen, Paul Darey and  Andrea Perini.

Here you have the official poster with the complete line up, and be ready for another amazing party in Ibiza 2015.

Today we have another great news for Ibiza 2015.

Carl Cox has announced the line up of “Float your boat” the official sunset boat party: the weekly appointment will start 7th of July till 22nd of September.

Here you have the official poster with all the dates and the artists. and these are some of  the most intriguing Ibiza’s boat parties for summer 2015!

A new week is starting and Ibiza Live radio (www.ibizaliveradio.com) the radio created and managed by Miss Luna, presents many intriguing specials!
In next days will play Miss Luna,  Felix Da Funk (Monday from 5pm till 6 pm Spanish Time with “Born In Ibiza), Wicked 7 Network (the network created and managed by Angela Caruccio) with Daniele Palombo, live sessions from White Ibiza, Stefano Noferini, Miss Disk, TWISM, Dj Salinas and Coyu Podcast!
And don’t forget, Saturday night, from 8.00 pm till 9.00 pm returns Ibiza by night radio show with a  super super super guest: Miss Luna, that recorded a special set for us!
But soon we will talk again about her! And stay tuned, because at Ibiza by night radio show are returning soon two great friends Cristian Viviano and Franco Moiraghi, plus a young lion… Frank Storm!
For further infos, this is the link to the schedule of the week:
http://ibizaliveradio.com/schedule/

Every wednesday, from June 18th till September 17th, in the largest club of Ibiza will be celebrated the new party that comes directly from the stars!!!!!

So..save the date..because of every Wednesday night in Ibiza there is a new one important party that Ibiza by night will follow. 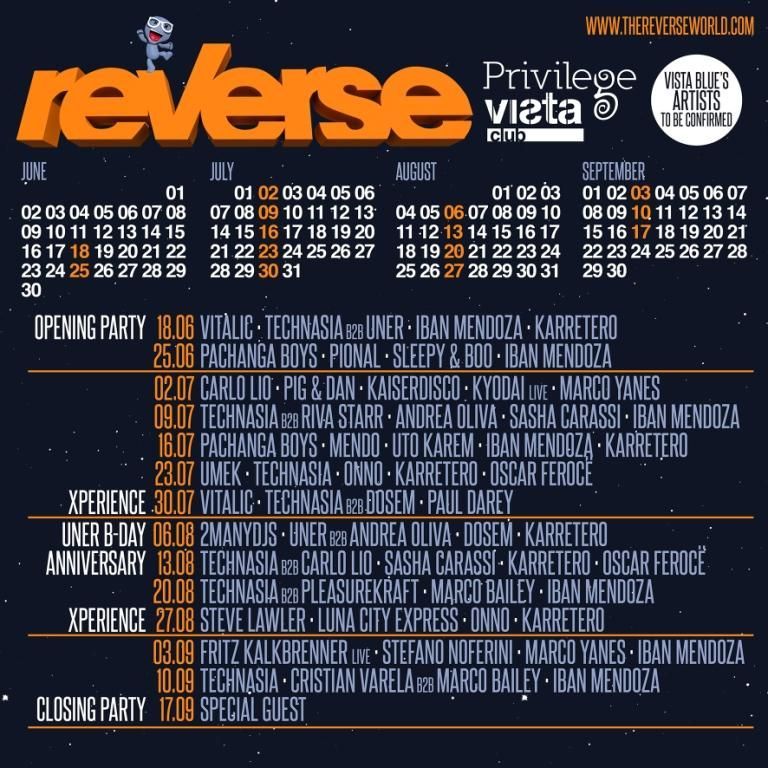 These are the dates and the line ups for the weeks from 22nd July till 19 of August:

Be ready for epic Tuesday night in Ibiza.. because of “King” carl Cox and his friends are back.. and of course, Ibiza by night will follow to update you! For more infos: http://www.spaceibiza.com

Privilege has announced a new intriguing show for Summer 2014: directly from the deep space..every Wednesday night at Vista Club, from 18th of June till 17th of September… will be time of “Reverse”!

The line up during all the season will include many excellent names, dj’s and producers as Vitalic, Umek, Uner , Technasia, Dosem, Sasha Carassi, Kaiserdisco, Karote, Karretero, Monika Kruse, Onno, Pirupa, Riva Starr, Stefano Noferini, Uto Karem.. Are you ready for an unconventional party?

Well..even if Ibiza by night doesn’t use to publish press notes.. this one was absolutely fantastic..so..if you want..read it 😉 so you’ll undestand how is intriguing this new project! And many thanks to Pat Comunicaziones for the support!

“High Level Managers from the Club confirm they had a secret meeting with a crew member of the unidentified flying object. He assured them he was bringing an important message for the Clubbers of this season in Ibiza.

On April 28th all alarms went on through the web “Ibiza Spotlight” when incredible, unbelievable images of the Sighting of an OVNI (Unidentified Flying Object) flying passed the Front of the Building of Privilege Ibiza came to light.

In the vídeo – that has had more than 10.000 replays in a week – one can observe how the strange object moves erratically at great speed. The scientific community has explained this as a desperate attempt in finding a parking space for a spaceship.

Suddenly the web was full of rash conclusions by onlookers and experts in paranormal events from the whole world, even echoed by some of the main national and music media ( Dj Mag , Vicious Magazine , Klubbers , Orbita Magazine )

Members of the Privilege Team present at the happening agree in their testimony that a Being of Great Dimensions and of a Curious Blue Color, with a soft touch and enormous glasses of white paste appeared smiling, greeting and showing a big tongue of an intense pink colour when He came out of the impressive metallic structure with the shape of a Flying Saucer that had just landed among them. The Alien presented himself apologizing for appearing without prior appointment and assuring his name was #Rebbie and that he was an inhabitant from a place called “Thereverseworld”.

During this first contact #Rebbie explained his mission to the High Level Managers of the Club. From “Thereverseworld”, One of the Halls of the Biggest Discoteque of the World, the View Hall Club, had been chosen as the place where Sightings would happen every Wednesday between June 18th and September 10th. There would be thirteen sightings.

After the confusion settled, #Rebbie expressed that the mission had a peaceful and festive nature and that it only wanted to observe the reactions and effects that the sessions of quality electronic music had on human beings, who would be voluntarily subjected to it on a weekly dose.

As all who were present have explained, #Rebbie confirmed that He was the first of many “Blue Members” on their way and about to come to our planet, destination IBIZA to prepare each Sighting in detail.

All those present, were worried and insisted #Rebbie to be merciful and to give them more details about the music clubbers were going to be subjected to. #Rebbie would tell them in advance that all recruits already had Vitalic, Umek, Uner , Technasia, Dosem, Kaiserdisco, Karote, Karretero, Monika Kruse, Onno, Pirupa, Riva Starr, Sasha Carassi, Stefano Noferini, Uto Karem, among others.

Privilege Ibiza confirms that each Wednesday (June 18th – September 10th) Live from “Thereverseworld”, #Rebbie and the members of the Squadron MGGroup will take the Booth of the View Hall Club to subject all those who wish to experience such futuristic experiment, which would surround them with a unique atmosphere, paranormal experiences and lots and lots of music. Each Wednesday in Privilege –Reverse“