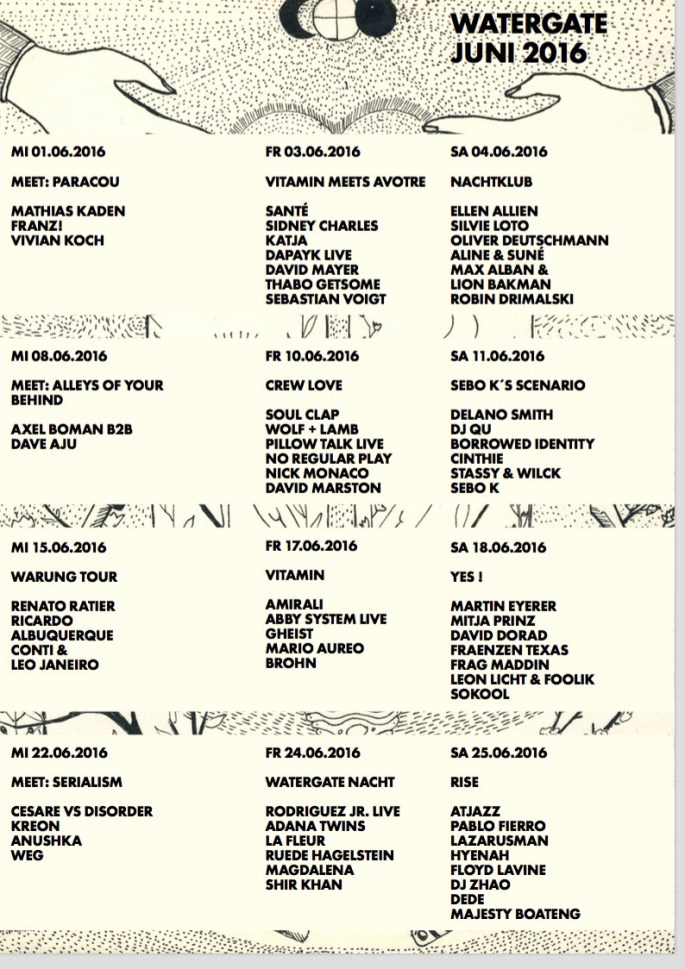 As we announced, Ibiza by night will have a permanente focus on Berlin, a place that we love and where we have a strong community of supporters.

Today we talk about about one of the most influent european club: Watergate, that presents also in June parties that make the difference !

Here you have the official …and…stay tuned because of soon we will talk about them.

Ready for a great June in Berlin by night? 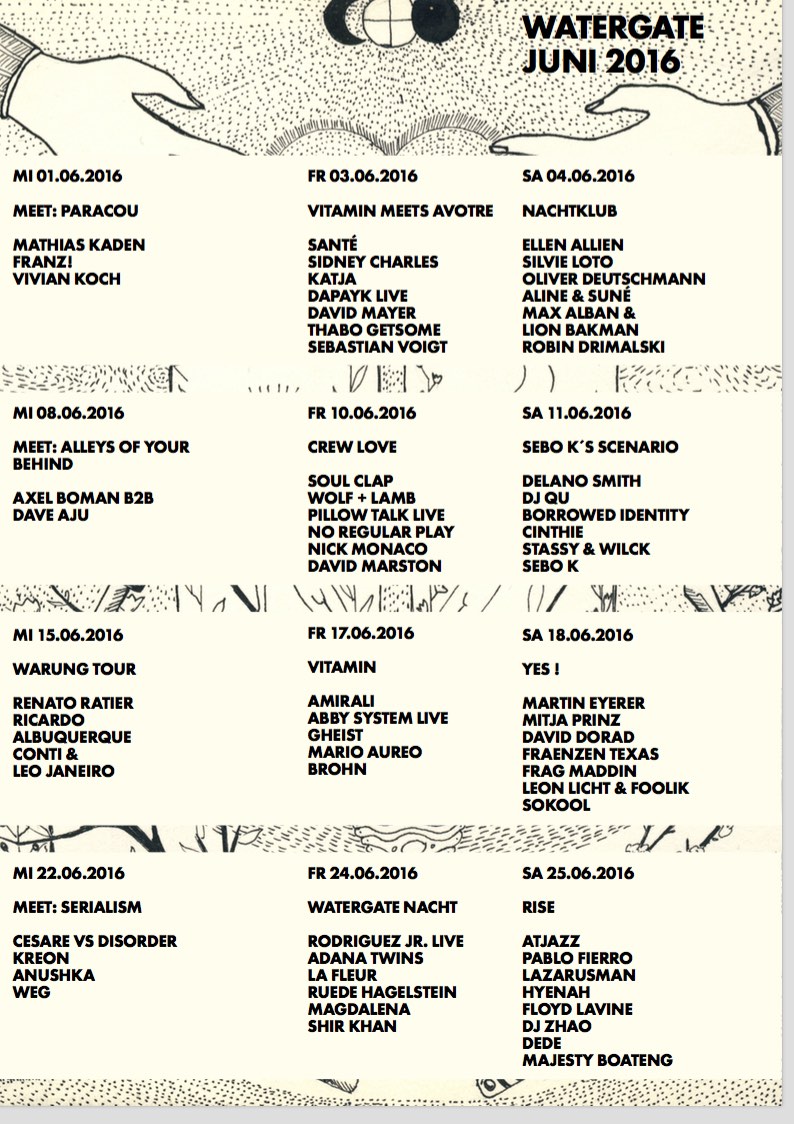 The party will take place every Wednesday night from 22nd June till 28th September. 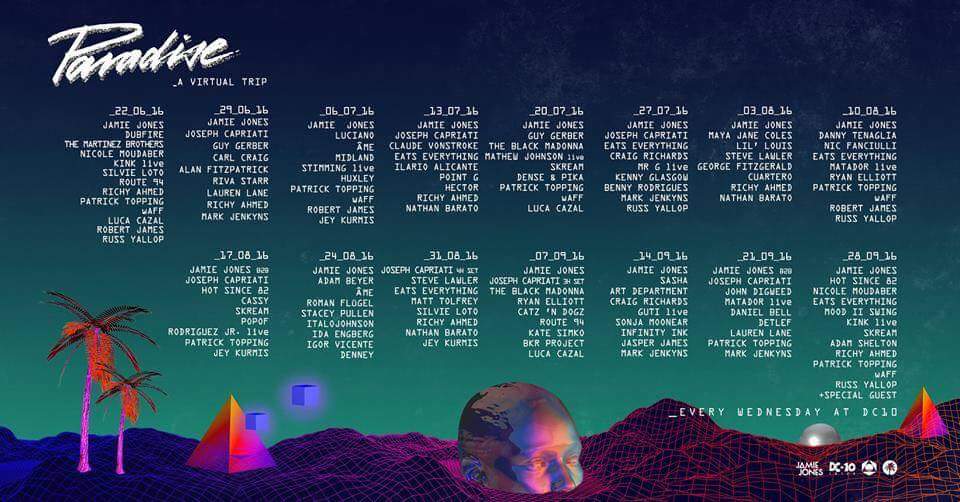 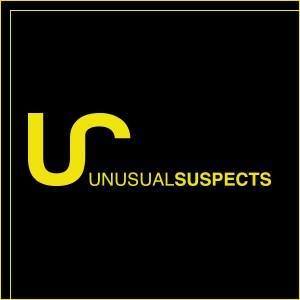 Unusual Suspects, after the good results of the opening party, presents other two great parties at Sankeys Ibiza, Thursday 19 of May and Thursday 26 of May.

Marco Bassi, founder and owner of Unusual Suspects said:”I am very happy for the opening party, we had more than 2000 friends that came and had fun with us. Me and my team are very proud that people believe in this project, and we have in store many surprises for next week! Don’t forget, the entry at Unusual suspects will be free for residents both parties all summer!“.

The first appointment is scheduled  Thursday oh the 19 of May, and in the club of David Vincent will play Thomas Melchior, Janina, Archie Hamilton plus Herr, an artist that we appreciated last summer during Ibiza’s boiler room…

Here you have the official poster. Useful link? Here!

But… but…save the date! Next 26 of May Unusual Suspects (plus Mindashake) hosts some artists absolutely loved in Ibiza!

In the Basement will play Paco Osuna, Paul Ritch, Egbert (live) & FerBR, in the Labroom the line up includes also interesting artists as Shlomi Aber (that in 2014 won Sankeys award as best Techno Dj and is appreciated on the island since years),  plus Janina, Frank Storm & Silvie Loto.

So, save the dates, because of Thursday night will be under the sign of Unusual Suspects.

UPDATE: Here you have the set times! 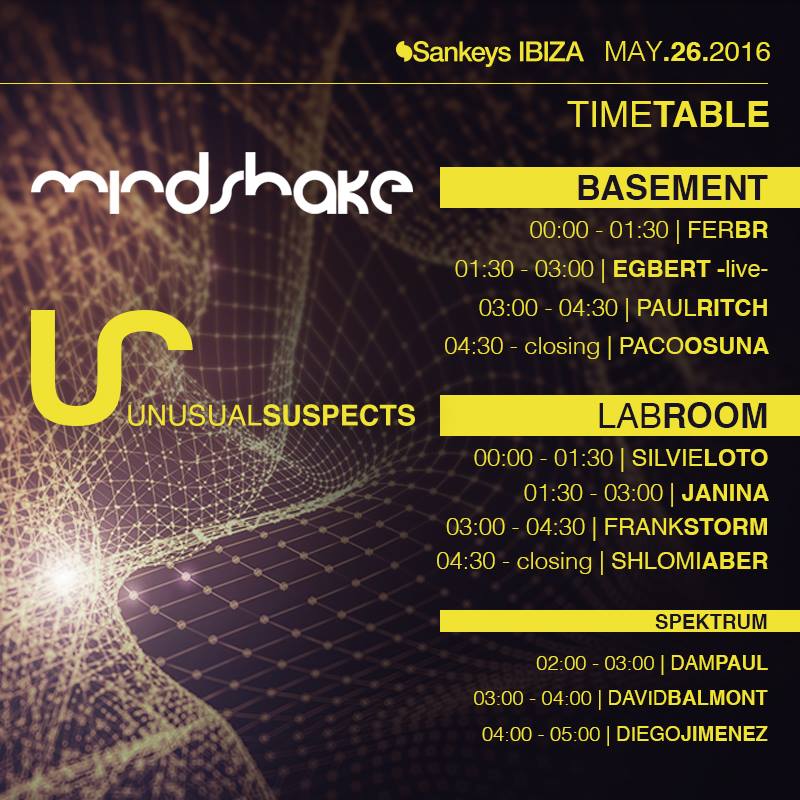 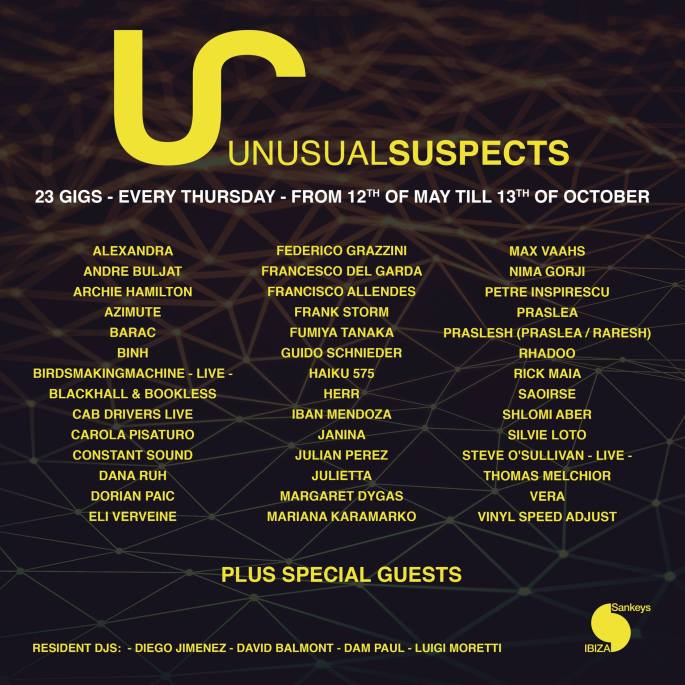 Unusual suspects, after the excellent results scored during last months, is back for a long summer  season at Sankeys Ibiza.

The party will take place every Thursday night, from 12th of May till 13th of October.

Today the organizers revealed the first list of confirmed artists…but stay tuned because of there will be several surprises, as said the organizers:”This is just the list of artists of room 1, we have many confirmed top guests, that we will reveal week by week, but trust us, it will be a great summer!“ 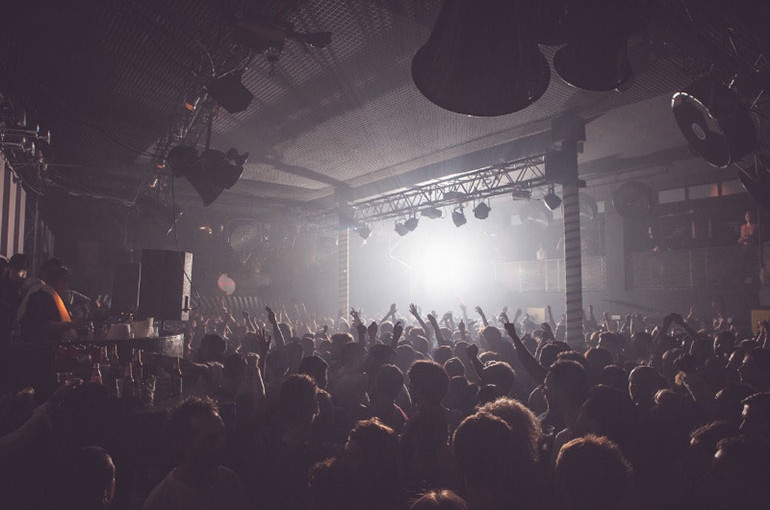 Don’t forget, in the main room will play the godfather of Detroit Techno, Carl Craig with several other guests.

So, stay tuned, because of Ibiza by night will update you weekly wit all the line ups.

Here you have the official poster with all the confirmed Dj’s, and the list includes also the residents Luigi Moretti, David Balmont, Diego Jimenez, Dam Paul. 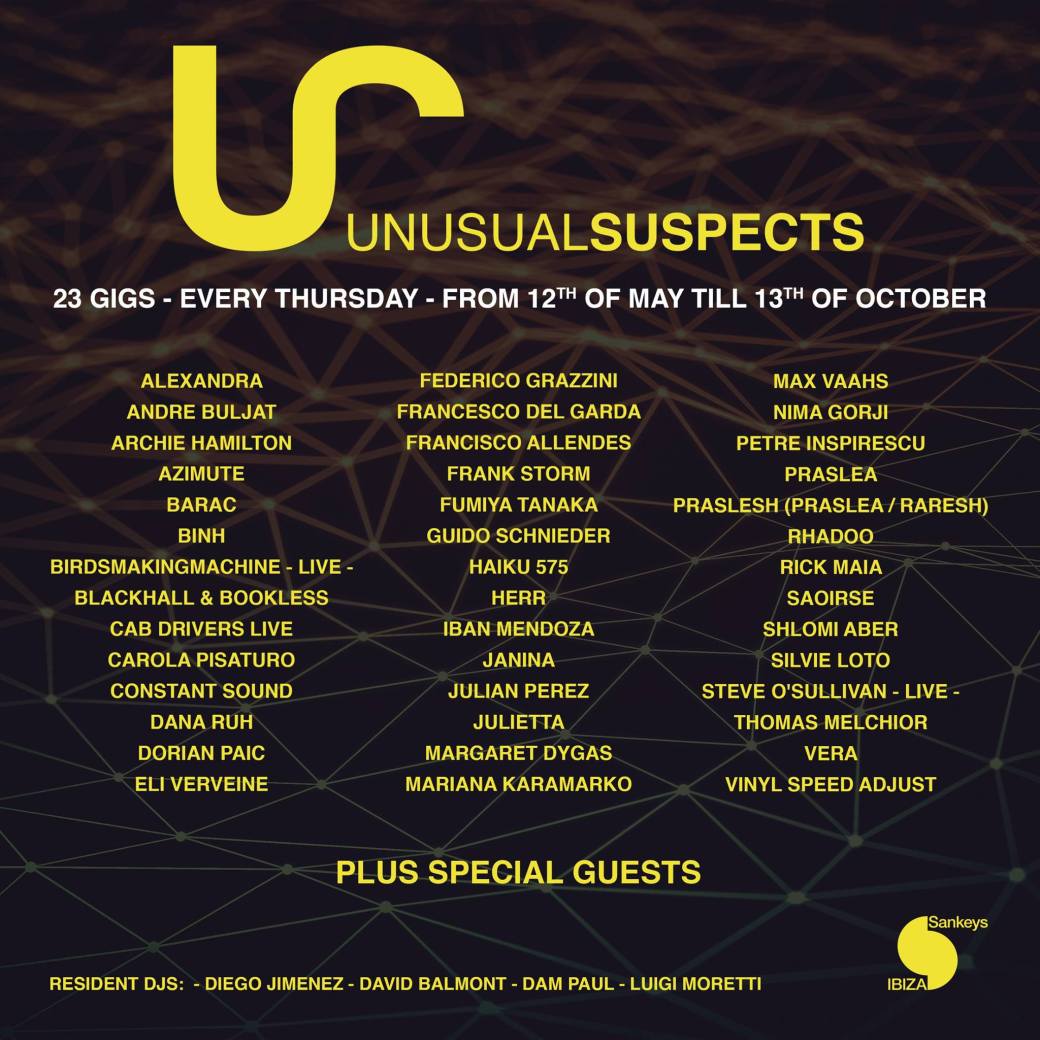 Saturday, 13th of June, from 23,45 till 6,00 am,  Nice To Be, the Promoter founded and directed by Diana Donzelli and Marco Donzelli, presents in Naples (Italy) at Ippodromo di Agnano, an unmissable party!

On stage will play two of the most loved artists in Ibiza:  The Martinez Brothers.

The lien up is completed by Silvie Loto, an Italian elegant artist that Ibiza by night already interviewed and heard several times in Ibiza, and by the resident dj Carlo Martino.

If you stay in Naples area, this is an unmissable party with pure Ibiza’s sound!

Here you have the poster of the party.

Friday 28th of November, starting at 22,00 till 5,00 the party Detroit Milano prresents a great event!

In the same night will play at New Madison (Via Giovanni da Udine 28, Milano) a superstar as Jamie Jones, actually one of the best artists in the clubbing scene!

Jamie Jones had a great summer 2014 in Ibiza, and his party “Paradise” at Dc 10 scored brilliant results.

Next friday jamie Jones lands in Milano, and the line up will include also Silvie Loto, one of the most intriguing Italian Dj and producer.

Silvie is  in Florence, at tenax, and last summer played again in ibiza at Music on: Ibiza by night already interviewed her (see the link below).

The line up in the main room is completed by another great friend of our community, Stephan esse, that is a dj resident of Detroit night and has played for Ibiza by night radio show.

On these premises, be ready for a night not to miss in Milano!

Ibiza by night is media partner of the event…and many thanks to Samuel Arrighi, fabione Detroit and Mauro Sangregorio for the media support!

And this is the poster of the party!

This is the link to the interview to Silvie Loto:

Wednesday at Dc 10, starting at 10 pm.. will be celebrated a great closing party with.. “A tribe called paradise”.

The party of Jamie Jones and friends  is one of the best parties of Summer 2014..and next Wednesday with mr Jones will play a great line up composed by Jamie Jones, Dixon, Cajemere, Ame, Deetron, Kink (live), Silvie Loto (that Ibiza by night interviewed a few months ago…), Richy Ahmed, Infinity Ink, Robert James, Waff, Russ Yallop and Mark Jenkyins!

So.. be ready for another unforgettable Wednesday night at Dc 10!

And the dream team of Ibiza by night will follow the event!

Here you have the poster of the party! 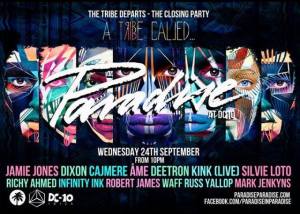 Tonight, Music on Ibiza presents a new one great episode at Amnesia!

The line up will include Marco Carola, the lady of techno Nicole Moudaber, the return of a great friend of our community, the Italian dj and producer, Silvie Loto, plus Guti and Mar-T!

As you can see five great dj’s  for an unforgettable night of music..because of Music on, the party created by  Roberto Postiglione, Ernesto Senatore and Luca Piccolo,  is the cult show of Friday night in Ibiza!

Here you have the poster of the event!

Music on, the cult show of Marco Carola and friends, has announced  the line ups  for summer 2014 at Amnesia!

The opening party will be celebrated Friday 6th of June and then every friday until 26th of September!

The party is organized by Ernesto Senatore, Roberto Postiglione and Luca Piccolo.

Here you have the poster with all the dates and line ups..and be ready for an unforgettable season of Music on!

Stay tuned..because of Ibiza by night will update you with big surprises! 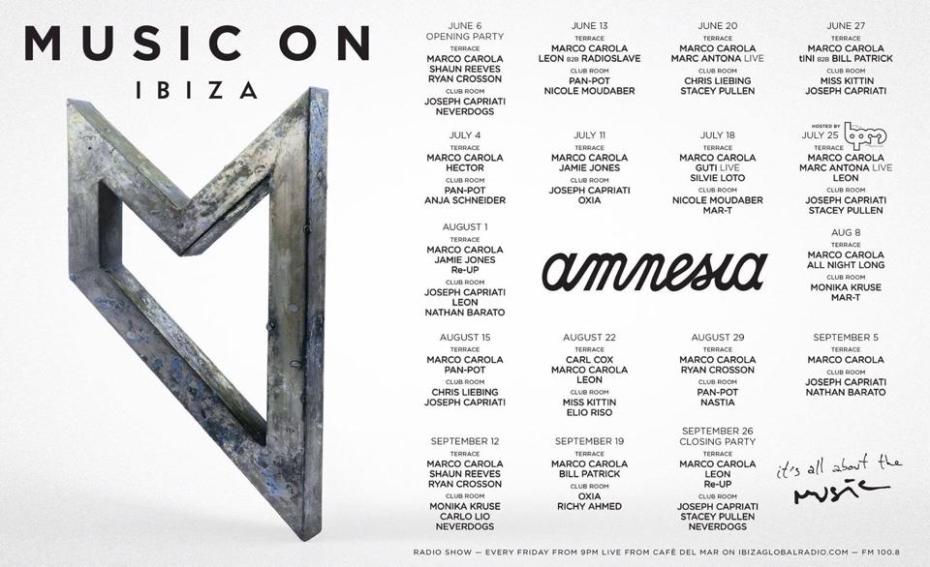 Ibiza by night meets Silvie Loto, an appreciated Italian dj that already played many times in Ibiza at Music on and in many other prestigious locations!

Silvie Loto developed a deep connection to electronic music from her early teenage years. At the age of 17, she reaches the shores of club music, through London, Spain and Germany where she discovered the essence of underground dance music and sharpened her skills before coming to the forefront of the scene. In 2008 she started to play at Tenax club in Florence and it was the starting point for her to play at the best clubs all over Italy, being on the same bill as many international djs.

She has been a resident of the legendary party Ultrabeat at Goa club in Rome and the well-know Nobody’s perfect party at Tenax club in Florence since 2010, where she proved to be capable of delivering the best sets from warm-up to peak time.

Summer 2012 she took part of Marco Carola’s widely acclaimed “Music On” party at Amnesia Ibiza, and carried on to Europe and the USA over the winter, playing alongside Marco Carola. Following this first edition’s success, she will be joining the “Music On” family again in Ibiza during summer 2013.

Her sets mix House and Techno influences and her broad knowledge of the electronic music allows her to deliver versatile and deeply emotional sets.

This summer Silvie released “Solstice” EP on BPitch Records, and Ibiza by night asked to Silvie her impressions about Ibiza and news about her future projects! 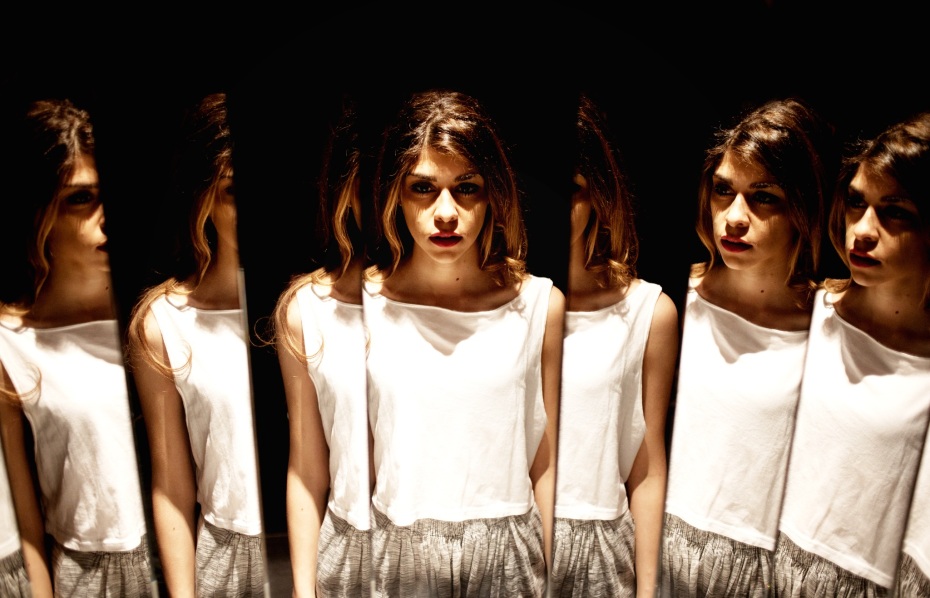 Silvie: This summer has been amazing. I had the chance to finally manage to stay a little bit more in the island and enjoy it properly. And I was lucky to play at 3 of the greatest parties on the Island: Music On, Paradise and Flying Circus. Music On was great. It’s Amnesia. The crowd, the energy there is just so powerful. Paradise was my first time playing at DC10 and I couldn’t be happier. The night was crazy! Finally, Flying Circus at Sankeys was an amazing party with friends and the amazing crew. Couldn’t be happier overall!

IBN: Silvie and Ibiza: how is your relationship with the island?

Silvie: I think this was my 5th or 6th year in ibiza, so my relationship with the island starts almost at the beginning of my career. I experienced it first from the dancefloor, and now I play there. So it is a long and deep relation with one of the most magical place in the world. It’s a big occasion to see a lot of friends that I’m not able to see during the winter. Then you have the amazing sea, amazing beaches, the parties. It s simply perfect. 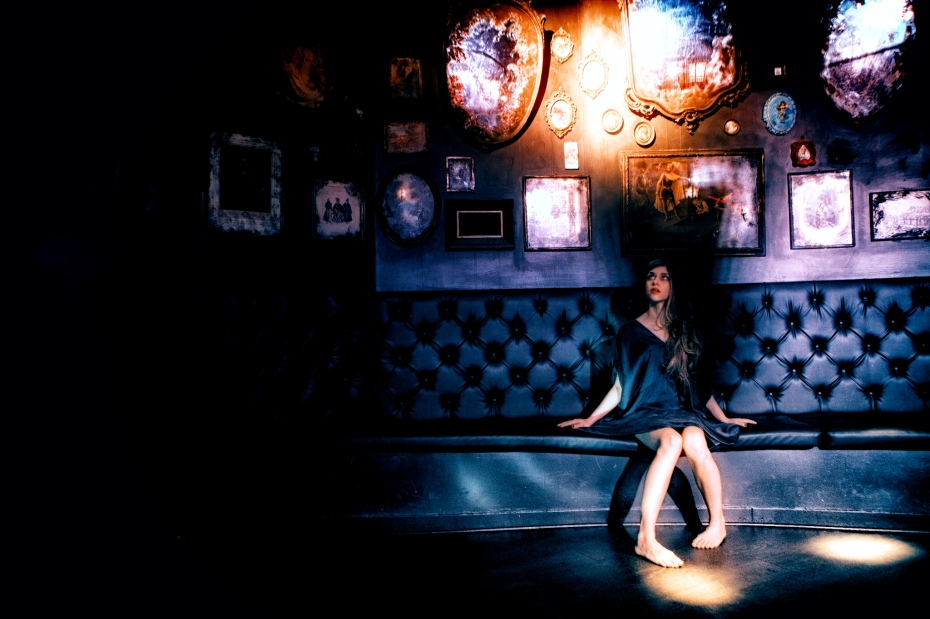 IBN:You returned to play for the second year at Music on with Marco Carola how was the experience? And the atmosphere of Music on?

Silvie: This second time was a great experience. I’m glad I was able to play before Marco again. The energy and the vibe there is just one of a kind. Maximum party overdrive. And it’s becoming more and more so every time I go there. The party made a big step up from last year and that’s incredible cause the last year was already at the max! I can’t wait to go back there on the 20th of September.

IBN: Summer has finished… can you disclose to Ibiza by night your project for next months?

Silvie: I’m working on a new EP, that I hope will follow nicely the Solstice EP. After a month in Berlin, I am back in Rome, looking forward to get back into the fall ‚ Goa and Tenax are open again and I can’t wait to go there.

For further infos about Silvie Loto: