And the line up is amazing: in consolle will play, as main guest, Reboot, plus Matteo Spedicati, Romano Alfieri, Melanie Ribbe, and, as resident dj, Diego Jimenez. The entry is free!

Many thanks to Nemo Ibiza for the media support!

Thursday, 28th of May, starting at 23,00, Lio Ibiza presents the opening party of “Be crazy”, the project created and leaded by Jean Claude Ades.

As Ibiza by night   wrote several times, Jean Claude Ades is one of the artists that plays one of the most elegant sound on the island.

Ades, after the brilliant performances at pacha and at Blue marlin, returns for an amazing night in the exclusive atmosphere of Lio! The line up is completed by Marcus Worgull, an excellent artist of Innervision.

So, save the date for tomorrow night!

Next 29th of May, in Ibiza, it will be possible to collect the free season pass for the party Hedkandi (that will be celebrated every Saturday night at Es Paradis)!

Here you have the official poster with all the details!

Tonight, at Pacha Ibiza, will be celebrated the opening party of one the news of summer 2015: My house, the new event of Martin Solveig!

“My house” will be hosted at Pacha every wednesday night, and for the first night the line up includes Martin Solveig, 2manydjs and Tiga.

Here you have the poster of the party, and this could be one of the most intriguing news of  Ibiza 2015! 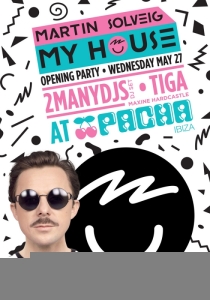 As we already said, No name Ibiza has in store many surprises for summer 2015.

The cult chiringuito of Playa d’en bossa and Ralf, one of the most important Italian dj’s , yesterday announced a new project named: “Casa mia“.

Soon Ibiza by night will have more details and will update you…but save the dates, because of No Name will play an important role in Ibiza 2015!

Here you have the official poster with the announcement!

Many thanks to Marco Bassi for the media support.